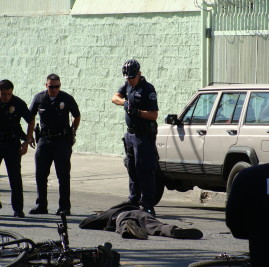 The highly publicized police shooting death of an unarmed man in North Charleston Saturday rattled some Upstate legislators and law enforcement officials who are condemning the officer’s actions and calling for change.

The video was played repeatedly by national news outlets Wednesday. It shows officer Michael Thomas Slager firing eight shots toward the back of 50-year-old Walter Lamer Scott as he runs away.

“I understand that the gentleman was African-American and the man was white. I don’t have a clue if it was about that, but I know that a human being was killed for running away,” Spartanburg County Sheriff Chuck Wright said. “There’s no excuse for that. … That bothered me terribly.”

“I just don’t see any other wiggle room,” Wright said.

Even if Scott had a firearm or presented a threat, it would have been the officer’s responsibility to retreat and take cover, Wright said.

“To be honest, it was mind-blowing,” Mitchell said of the shooting.

He said “bad apples” do exist within police agencies and more emphasis needs to be placed on police officer hiring and training.

“Everybody is talking about the bad apple and we forget about the tree,” Mitchell said.

Slager was not wearing a body camera, a device that’s been heavily emphasized in the wake of recent fatal police shootings around the country.

Mitchell said the incident will intensify the use of body cameras but worries about their effectiveness. Most manufactured body cameras put the record function in the discretion of the officer, allowing the officer to turn the recording on or off, depending on the situation.

Legislation has been proposed in both the state House of Representatives and Senate that focus on body cameras for law enforcement and enhanced policies, Mitchell said.

Wright said cameras have been invaluable tools to refute discrepancies of either a suspect or officer.

“We don’t want it to look like we’re covering anything up. We don’t, and 99 percent of the time, we’re doing it right,” Wright said of body cameras. “It helps take away questions.”

He said Slager’s accused actions are not reflective of law enforcement officers including his deputies in Spartanburg County.

“We train all the time about that. If somebody is running away from you, unless he is over his shoulder or turning his back to shoot at you, and I did not see that in the video, then I don’t see anything even remotely that would allow that guy to do what he did.”

Wright said agency policy is for deputies to begin recording video at the onset of responding to a violent situation such as a domestic disturbance.

The Spartanburg Police Department has 20 of its officers using body cameras while they are in a trial phase testing the cameras. Chief Alonzo Thompson said it has been his goal since first coming to the department early last year that he wants every officer to wear body cameras and carry less-than-lethal weapons such as Tasers.

The issue, he said, is budgeting. He said Spartanburg City Council sees the benefit of body cameras but that the department does not currently have the funds to order more.

“We’re doing our best to obtain body cams but it comes down to a money issue,” he said.

He said he remains committed to serving the community using the best possible practices.

“Any equipment that is purchased by us is to enhance the efficiency and effectiveness of the citizens we serve,” he said.

He declined to share his viewpoints on the North Charleston shooting “with the situation still being ongoing,” he said.

Spartanburg NAACP President Monier Abusaft said emphasis should be placed on making police-worn body cameras a top priority. He said the community needs to be better engaged with the police department. He added that residents should be able to weigh in on police issues for consideration on such topics as equipment, policies and conduct.

Tweet
Share
Pin it
Previous StorySpartanburg County 5th most police shootings out of 46 counties in the State of South Carolina Next StoryKBBQ. Great local BBQ